A winter wonderland, indeed. I have never been over Porters Pass before with snow down to the road level. Fresh powdery snow covered literally everything, which is an absolute paradise for the skiing but not so much for the driving and tramping lot. Goodness knows what could have happened up that access road to the Broken River Skifield with those rented vans had the trailers still been attached. 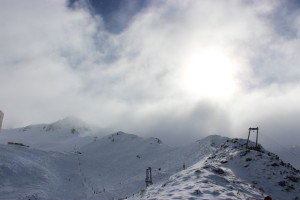 Chains were fitted to Tania’s automonster by the girls (!) while Glen and Guihelm waved at passing cars and tracks. Then, we started crawling up the road followed by the vans. Progress was slow, the road narrow and we cringed every single time when we had to pass a car or get around a very steep hairpin curve. And of course, the car park was full, too. Reversing impossible due to all the snow. Luckily, one skiing party was about to leave and we could steal their parking spot. We still had to fit the three vans in there, though. After one van got stuck in a ditch. It was a mission to get it out. There was a lot of slushy snow and it was rather warm, not exactly ideal for cramponing work and we were like: “Why are we even here?” Yet, we were determined to make the best out of it.

We showed people how to fit crampons and started walking up to one of the lodges, passing a sign declaring this area as ‘Whiskey Creek’, alas there was no whiskey to be found. After lunch we formed three groups according to ability levels and set out to climb up the skifield. Due to the sheer slush, crampons were not really needed. Instead, we focused on ice axe use, two-point contact at all times and how to easily cut stairs while simultaneously trying not to be run over by skiers. The two other groups charged up the mountain a bit faster in order to practice some serious self-arresting. The problem with the snow being so soft required some decent bum-sliding in order to create a nice and slippery slope by bum-sliding to make the exercise worthwhile. On the downhill journey we noticed a badass mum who skied elegantly to the lift holding her child in one arm while carrying the skies in the other. Impressive work!

Given the frosty temperature we aimed to be down the mountain by 4 pm in order to avoid being on that access road when the snow turned to ice. Nevertheless, it required some terrific driving skills, especially after various cars skidded out and had to be pulled back by a towing line. You’re always in for an adventure…for better or worse.

We all made it back down the hill unscathed and safe, promptly rushing home to Christchurch.